'Walking Classroom’ gets students learning on the move

Article from The Union

Article from The Union

It’s time for the lesson to begin for the fifth-graders in teacher Nicky Philips-Brown’s class at Lyman Gilmore Middle School. But instead of settling into their desks and opening their textbooks, the students grab their small rectangular audio players, plug in their headphones, line up and head outside.

For the next 20 minutes or so, they’ll walk a wide loop around the perimeter of the school, each listening to today’s lesson: a podcast on a particular genre of storytelling.

Once or twice a week since the beginning of the year, Philips-Brown’s class has been participating in the “Walking Classroom,” a program designed to get students learning on the go.

“I thought it was a really great way to combine helping kids to concentrate, getting exercise at the same time, being healthy and learning something they might not otherwise learn,” Philips-Brown said.

The “Walking Classroom” was developed in 2011 by a fifth-grade teacher in North Carolina who was looking for a way to incorporate more exercise into her students’ days. She created nearly 100 podcasts, all aligned to English Language Arts Common Core standards.

“I can be funny and engaging, but being able to mix it up is important, and this seemed like an interesting and fun way to get the standards-based curriculum across.”Nicky Philips-Brown’teacher at Lyman Gilmore Middle School

The podcasts, which run anywhere from 11 to 18 minutes long, cover a wide variety of topics — including lessons on John Muir, Renaissance artists and the Civil War. To ensure the information sticks, each podcast also comes with a quiz students take when they return from their walk.

Philips-Brown discovered the program in 2013 after looking online for something she could do in the classroom that would help her students feel less restless in the afternoon, she said. She applied for a grant to cover the cost of the program — $3,000 for 30 audio players and the corresponding teacher curriculum — and found out her request had been approved toward the end of last school year.

She said one of the perks of the program is that it allows her to add some variety into traditional lesson plans, giving students another resource for comprehending concepts and information.

“I have a very differentiated group of learners,” Philips-Brown said. “Using a learning style that’s different, that’s very important to me.”

The audio players also give her a way to embrace technology in the classroom instead of competing with it.

“The kids spend a lot of time on their different devices,” Philips-Brown said. “I can be funny and engaging, but being able to mix it up is important, and this seemed like an interesting and fun way to get the standards-based curriculum across.”

And it is fun, said her students.

Vogt added that, as a self-proclaimed book worm, she doesn’t get outside as much as she should, so the walking classroom is good exercise for her. But she also said it can be a more interesting way to learn than simply sitting in the classroom — she especially likes that each podcast is narrated by students her age.

Gabe Winter, 10, said the walks are a welcome break from sitting inside the classroom, and help him burn off some energy.

“It makes me feel better in class,” Winter said. “I’m not as hyper as I would be. It makes me calmer.”

In addition to the main lesson, each podcast includes a health-related tip, such as how exercise benefits the body or why a healthy breakfast is important.

“I learned that if you walk faster, you get more exercise, and it’s healthier than walking slow,” said 10-year-old Keira Ferguson.

Philips-Brown said she’s hoping to incorporate the program into her classroom even more next year, as well as share the curriculum and audio players with the school’s other fifth-grade classes.

She said she’s been encouraged by her students’ enthusiasm and the effect she’s seen the weekly walks have on them.

“They want to walk and listen at the same time,” Philips-Brown said. “And when they come back, they feel like they’ve exercised, but they can still focus. It makes the last hour or hour and a half of the day easier.” 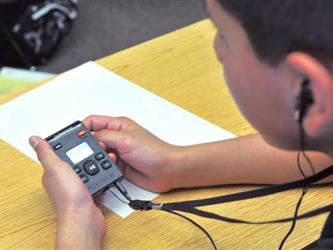 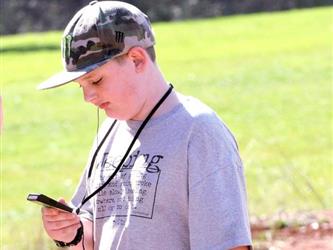 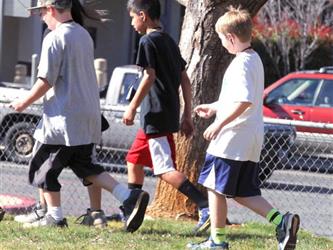