After last year’s success with “Shrek Jr.,” Lyman Gilmore’s Musical Theater Program is at it again, but this time around, they’re taking things down to the ocean floor with your favorite mermaids and sea critters in “The Little Mermaid Jr.”

Since the play is based off the musical, it will have a few additional songs that some may not recognize, but don’t worry. Those attending will still hear all of their favorite tunes from the movie.

In the past two years, Lyman Gilmore’s Musical Theater Program has been growing quite a bit, since school officials decide to unite their drama and choir classes to be able to offer the program.

The first production included about 45 students participating and helping with the production of “Shrek Jr.” This year, that number has expanded to 60.

The school provides many opportunities for its students to make it the production appealing to more than just those interested in singing and/or acting. Aside from those things, students can also be a part of the crew, or help with the artistic and costuming aspect of the play. There are many roles for kids not only on the stage, but behind also the scenes. For Lyman Gilmore’s musical theater teacher Rebecca Browning, it’s the different styles and roles featured that she enjoys so much about the class.

Aside from the effort students and teacher have put into the show, the program has also received substantial support from the rest of the school community, including other students, their parents, staff members and the western Nevada County community.

For example, one of Lyman Gilmore’s academy classes helped to build the wheel of Prince Eric’s ship. Much of the remaining set pieces were built by students and their parents during a set build. There’s even been support from Nevada Union High School’s Ag Mechanics workshop, which helped to also build set pieces. And this year’s show is once again being performed at Nevada Union’s Don Baggett Theater.

While some students were part of last year’s production, others have not had any experience with being a part of such a big show, which means being on a stage and being involved with such a big production is a brand new experience. However, as challenging as it may be, Browning said the students are taking on the challenge very well and working hard — and they’re the ones essentially running the whole production.

When the play opens at 7 p.m. Feb. 26 it won’t be the parents or teachers running around backstage and keeping things on track, but the students who are making sure the show runs smoothly.

That’s one of the things that makes this production so special, Browning said. The students are really excelling and are going to get the chance to show just how much they’ve learned. 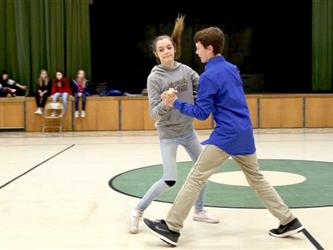 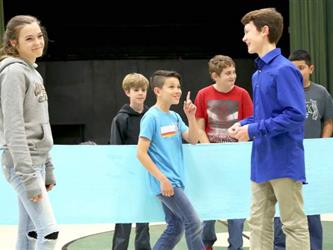