The sixth graders in Dave Lawell’s class at Lyman Gilmore Middle School gathered in groups of three or four around the small roller coasters they built from tubing and plastic connectors.

They’d carefully designed the structures. Now, it was time to put them to the test.

When Lawell gave the signal — “Drop!” — the students sent marbles racing down the roller coasters; the goal was to have the marble land safely in the plastic cup at the end of their coaster’s tracks.

“Too much momentum. How do you get less momentum?” Lawell asked a group whose marble overshot the cup, prompting the students to drop the marble from a lower point on their roller coaster.

For the students, the activity in Lawell’s class was an exercise in design, engineering and basic physics. But the class is part of a larger movement by Lyman Gilmore to provide students with a STEAM-based curriculum, or one that is focused on science, technology, engineering, the arts and mathematics.

“If one day I have nothing to do, I can go on the computer and start coding. I can make a robot move. I can change the world. I could be that next Albert Einstein.”Patience Mattson

At the beginning of the school year, Lyman Gilmore launched a STEAM Academy with 60 of its current sixth graders. The academy is a sort of school-within-the-school, where STEAM subjects are integrated into hands-on, inquiry-based lessons with an eye toward college and career readiness.

“(The academy is) providing them with a clear pathway to their career or college,” said Lawell. “A lot of them, they don’t know that direction to travel. This is giving them a road map that will get them to their destination.”

Lyman Gilmore’s STEAM Academy was inspired by some of the ideas presented at a state STEM (science, technology, engineering and math) conference in San Diego, which Lyman Gilmore Principal Chris Roberts attended last year with eight of the school’s teachers. Elements of the STEAM philosophy, such as integrating technology into the classroom, have been in place at Gilmore for years, but the school’s staff saw the opportunity to organize those efforts under the academy.

The school dedicated four of its teachers — Lawell, Barry Kyle, Michael Day and Garrett Bates — to creating the academy’s curriculum and teaching its classes. The school chose to pilot the academy in two pathways for two specific groups of students — accelerated students who need more advanced enrichment, and those who need extra support to keep them engaged in the classroom.

“We wanted to try to find something that we could hook them with and get them excited about being in school again,” Roberts said.

Each strand of students attends core classes where the lessons are designed around STEAM concepts. For instance, in Day’s humanities and language arts classes, students are studying ancient history through the development of technology. During a lesson on stone tools, students were tasked with developing a tool, considering how it could be improved, using it in the field, and writing about how technology has advanced since the stone age.

“It’s building a lot of real-life connections as to why you want to go to school and why you want to learn,” said Bates, who teaches math and science within the STEAM Academy. “When kids are just solving problems on a piece of paper, they go, ‘What’s the point?’ but when you show them that their rocket just went that far and how fast it was going, they want to make that rocket go faster.”

The goal is to encourage students to think critically about the world around them, to come up with innovative solutions to problems and to develop a set of skills that will prepare them for success beyond middle school. The school envisions eventually aligning the academy with programs at local high schools like Nevada Union and Ghidotti Early College, and surveying local business owners about the qualities they look for in potential employees to make sure the curriculum prepares students for the workforce.

“I don’t know how many times I’ve heard kids say, ‘When am I ever going to use this?’” Roberts said. “Now, having an answer to that question through this program is incredible.”

Ultimately, the school hopes to expand the academy to all students in every grade, but that will likely take time. Roberts said Gilmore was able to launch the academy this year without hiring any additional staff and without significant additional funding. Staff is hoping to continue to build on the program over the next several months, forming partnerships with community members who are interested in making classroom appearances as guest speakers or hosting the students in short-term internships.

The school is also fundraising on its website at www.gilmore.gvsd.us/LGMS-STEAM-Academy to raise about $15,000 that would go toward additional technology and computer programming components of the academy, including a robotics team Kyle hopes to start in the next year.

Staff at Gilmore said they’ll be looking closely at a variety of factors to monitor how well the academy is working, including student assessments, attendance and behavior referral statistics and an annual evaluation of the academy from stakeholders, including parents, teachers and any community partners.

As they work toward their long-term goals for the academy, they’ll continue to lay the foundations of the STEAM learning philosophy in the classroom. On a recent day in Kyle’s class, that meant introducing students to the basics of coding with JavaScript.

Sixth-grader Patience Mattson was working on her iPad, attempting to write the computer code that would produce a picture of a waving snowman.

“It’s frustrating, but it’s also really fun,” Mattson said as she tried to figure out the right command to program in. “It’s worth being frustrated when you actually figure it out.”

Mattson said she could envision herself using coding skills in her future career — but even if she doesn’t pursue computer science, she can see the skills coming in handy.

“If one day I have nothing to do, I can go on the computer and start coding. I can make a robot move,” she said. “I can change the world. I could be that next Albert Einstein.” 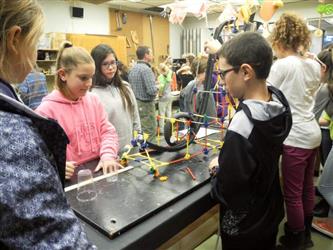 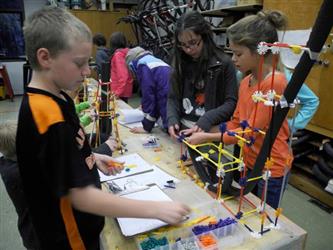 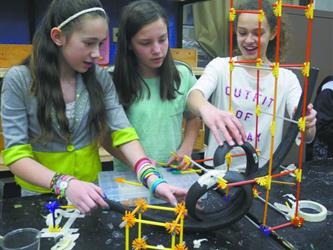 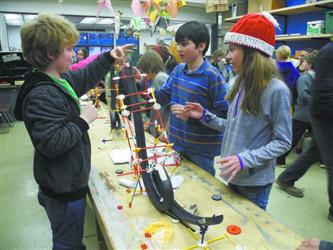