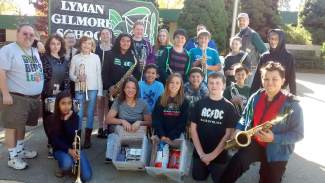 Band students at Lyman Gilmore Middle School are showing their support for another group of musicians playing more than 7,000 miles away — members of the 82nd Airborne Division Band stationed in Afghanistan.

The students have been donating special treats for the soldiers, including Clif Bars, home-baked cookies, jars of peanut butter and hot chocolate, and packing them into care boxes that will be shipped Saturday, in hopes they’ll get to the soldiers by Thanksgiving.

“It’s just a way to give back to people who are serving our country and do all this stuff so we can have freedom,” said eighth-grader Justice Lewis, who helped coordinate and organize the care package donations along with seventh-grader Madison Felhaber.

The idea to adopt the 82nd Airborne Division Band came from John Basa, who has been a band accompanist at Lyman Gilmore for more than 10 years and is an accomplished drummer with more than 40 years of experience playing in combos, orchestras and jazz, rock and marching bands.

After enlisting in the Army in the late 1960s, Basa traveled throughout the U.S., as well as in Germany and Korea, playing drums in the military band.

“It’s just a way to give back to people who are serving our country and do all this stuff so we can have freedom.”Justice Lewis, Lyman Gilmore Middle School eighth grader

“I know what it’s like to be stationed overseas and be away from friends and family,” Basa said. “It gets kind of lonely.-

And he also knows how it feels to receive care packages when overseas.

“That’s a soldier’s highlight of their day, when they receive a package,” Basa said. “It just makes you feel very good and loved.”

He was able to get in touch with a sergeant first class in the band through the son of a friend who is currently deployed in Afghanistan.

“They think it is absolutely great that we want to do that, and appreciate us thinking about them,” Basa said.

The students at Lyman Gilmore have enthusiastically taken up the cause, signing a Thanksgiving card and writing letters to soldiers to include in the care packages.

Basa said adopting the army band gives the students some insight into events happening on the other side of the world.

“This opens up the kids’ world so much more than just Gilmore and Grass Valley,” Basa said.

The students plan to do another collection in a few weeks so they can send a second round of care packages to Afghanistan around Christmas.

Lewis and Felhaber said they hope the soldiers feel special when they receive their boxes.

“So they know that somebody’s thinking of them and wants them to succeed,” Lewis said.

“And they know that there’s people at home waiting for them,” Felhaber said. 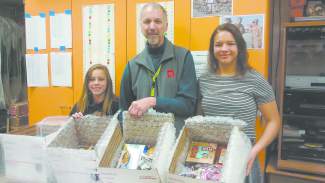